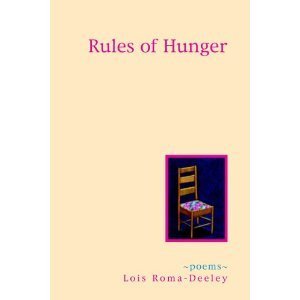 Critical Praise for Rules of Hunger

"One poem in this collection opens with the line, 'Sliding over these days, peeling shadows off my heart'; a second poem closes with the question, 'I ask, again, what takes us/​to and from our dreams.' These remarkable lines set the stage for this shadow-play book of poems, whose offerings gift the reader with glimpses of a literal peeling away of the narrator's layers of experience. These poems create a mosaic of hard joy."
--Alberto Ríos


"Rules of Hunger is a book in praise of noble gestures and honorable lives. It is also a book of deep longing and obsession. With a sure and savvy voice, Roma-Deeley travels these two roads at once: the daily path of the ordinary life and the visceral highway that delivers us from the familiar. In between we meet the ancestors, the dreamers, the lovers, and the burning door of sorrow. Rules of Hunger is rich with the contradiction and wild dimension that makes us human."
--Jan Beatty


"These poems deliciously tilt our equilibrium inside the private lives we long for. Lois Roma-Deeley's bright visual effects infuse her narratives with tender and tough compassion. One of Anne Sexton's gifts to us revealed that the dramatis personae of domestic life feed us in a disappearing act of human transmogrification. Roma-Deeley is alert to danger, yes, but she also assures us that hunger not only commands us, but guides and feeds us. Phoenix and Sicily could not otherwise coincide so well! 'The spinning world/​laughs' and in this book of beset perceptions and retrievals, we are beloved guests at the celebration."
--Judith Vollmer


"The poems in Lois Roma-Deeley's first collection, Rules of Hunger, often start in the rich world of the family (Italian, in Roma-Deeley's case) with its legacy of sorrow as well as humor. Then in scintillate, sudden leaps, they take us elsewhere. 'North of Babylon,' for example, moves from a childhood city 'built with more walls than/​gates' to the haunting image of a woman seeing 'an argument of opening doors.' I'm utterly compelled by how wondrously, again and again, Roma-Deeley goes from the generally observable to the specifically abstract. This is a startling and beautiful debut collection."
--Cynthia Hogue


"Lois Roma-Deeley's powerful poems are born from danger into a dangerous world, where 'plastic doves pile around your knees' in the Kay-Bee store, each bird 'lying on its broken back.' These finely crafted poems immerse us in the effects of growing up 'on the other side of town.'"
--Jill Breckenridge


"Through the twin lenses of grief and joy, Rules of Hunger examines one woman's childhood and her subsequent removal to a contemporary desertified Arizona; from the combined images of that particular gaze, Lois Roma-Deeley creates meaning. These are poems rich in content, muscular in their form and strange in the way all good art is strange. The poems of Lois Roma-Deeley are fierce, pared down and essential and accomplish the greatest of poetic tasks, which is to document—with care and precision—the lives and deaths of those whom we love."
--Mark Wunderlich

When in 1990 he had seen the first issue of Bill Baer’s The Formalist, A Journal of Metrical Poetry (alas! no longer extant) Arthur Miller wrote, "I am sure I will not be the only one who will be grateful for it. Frankly, it was a shock to realize, as I looked through the first issue, that I had very nearly given up the idea of taking pleasure from poetry." That is the trouble with American poets nowadays, they have forgotten how to entertain the reader. The result is that almost none of the general public reads poetry anymore — it is no longer a pleasurable experience. That's why running across someone like Lois Roma-Deeley is so satisfying. Her first book of poetry, titled Rules of Hunger, is not only readable, it is enjoyable to read. She is a poet who often writes out of her Italian-American background, but not only that. She can conjure up that world in words. You don't believe me? Look at this from "The Apostle of Wax and Shine":

If St. Paul should ever lose his way
on this road that leads through 1959
to my seven-year-old self sitting on the front steps
staring into the nothingness that would become my future,
he would find a rag top convertible and my father
the Apostle of Wax and Shine.

Perfect!
And then she follows that book up two years later with another terrific collection, northSight, which is just as enjoyable to read as her first. She has continued to develop her talent for capturing the personality and character of an individual in a few absolutely solid, pinpoint-focused lines. Not to mention the milieu that her subject inhabits. She is able to pull a reader into her world by the nape of the neck and make him live there until she's done. Then, when you’re through reading, you want to thank her for the abduction.

And that's not all. She is no kind of metrician, but she has such an ear, and such a solid grasp of what the language can do that her experiments are sometimes amazing, like "Obligatory Sex," which doesn't have a sentence in it, just words: verbs in the first triplet; nouns in the second; adverbs in the third; nouns again in the fourth, adverbs and adjectives to end it, but it's one of the sexiest (maybe even one of the dirtiest) poems I've ever read. I suppose a teacher would have to tell students not to try to write like this, because the odds against its working are vast, but on the other hand we will be glad that Roma-Deeley probably never had a teacher who'd point that out to her.

Another thing about Ms. Roma-Deeley is that she is a fine narrator, and she can handle dialogue with the best fiction writers. Her brief four-poem series “Voices from the Aftermath: New York City Requiem” is the most affecting tribute to — and evocation of — the disaster of “9/11” that I have seen to date. These are monologues by people who were left behind, but who are forever trapped in the event: “Young Boy Running in the Street,” “Woman Standing at Ground Zero,” “Widow Waiting Outside the Station House,” “Father Among the Rescue Workers.” I will not quote from any of the poems because to do so would be grossly unfair to readers. However, I do not exaggerate when I say that these poems alone are worth the price of the book, and more than that.

It’s been a long time since a collection has so affected me. Whether she is writing of our twisted relational lives ...of her own seemingly innate sense that something’s wrong, Roma-Deeley writes with that curious blend of authority and self-doubt that marks our best poets. Ultimately, and reassuringly, she finds the affirmation that sustains her through it all; as her title poem urges, “having courage, let us write a word or phrase on the short list of certainties something that sounds very much like praise.” Which is just what she does in this tour de force.
~Sydney Lea, author of twelve collections of poetry, finalist for the Pulitzer Prize in Poetry, former Vermont Poet Laureate.

High Notes
"It's taut, tough, in your face and orchestrates like a mad symphony of howls and laughters and blues, blues, blues, that burn to read. It's clean, crisp, starlight fire, that'll lead you back to your life purpose and make you rethink and reshape your view of life." --Jimmy Santiago Baca
northsight
"These poems are tough, brave, but also hold an almost physical balance against human suffering."--Norman Dubie