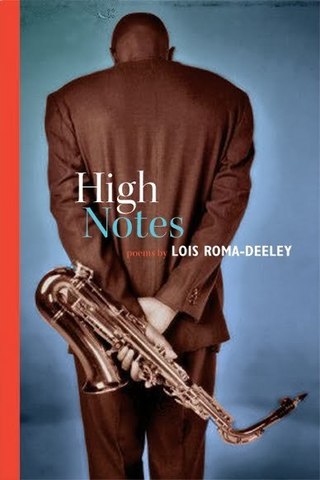 Set against the backdrop of the Civil Rights Movement, an interracial love story unfolds. With its many thematic riffs and harmonic phrasings, Lois Roma-Deeley's award-winning collection of poems invites the reader into the shadowy jazz scene of the late 1950s, where music and language fuse into a road of longing and desire.

Each of the main characters—hustler,jazz man, singer, waitress—and even the one hovering Angel who speaks to each of them—struggle with the tyranny of choice.

Jake’s addiction to drugs has resulted in the deaths of his children and the near ruin of his music. He “doesn’t know how to live” and doesn’t know if he wants to learn. (“The voices from outside of time/will press their lips to both my cheeks and weep, What do you want?). Harry Jones (“The Minister of Rush Street”) tempts Jake, once again, with drugs, telling him to “Be that refusal/ which does not bow and will not weep.”Sugar Baby’s unrelenting grief and emotional dependence on Jake has pivoted her life toward drugs, alcohol and prostitution.(“You go as morning and return at night/ You go as shadow and return as light.”)

As the Civil Rights movement is stirring, Jasmine, for whom sexuality has always meant power, is beginning to confront her own anger over injustice. The spirits of Billie Holiday, Art Pepper, Chet Baker, Charlie “Bird” Parker, the crowd at the famed Minton’s jazz club, ghosts from Congo Square—even a blue monk and several archangels—wander in and out of the narrative offering advice and commenting on the action.

At each and every turn, the Angel has not given up these souls of “the imperfect now.” The Angel tells them: “Soon it will be enough/under this blue note of still sky/to open, slowly, both eyes and//say it, sing it, play it//blind.”

Winner of the Samuel T. Coleridge Prize, Lois Roma-Deeley’s latest poetry collection High Notes tours the bleak, unforgiving world of jazz in the late 1950s with a cast of five dramatis personae who move through impoverished landscapes of bars, pawnshops, grimy hotels and police stations. Carrying burdens of regret and despair, death and rage, the figures who people High Notes pacify themselves with liquor and dope in the loneliest corners of Chicago, New York, Detroit, Kansas City, and Los Angeles, destroying themselves on the edge of hope.

Saxophonist Jake Delmonico essentially murders his two young sons as captain of a car accident while driving high. His common-law wife, Sugar Baby Hayes, a blues singer so wracked with the agony of losing her children (and unable to forgive her husband), is soon strung out on the same drug that contributed to their deaths, as though she is both numbing herself and reaching into her busted veins to find her boys and bring them back to life. “Not Yet a Junkie Whore,” begins with the result of Sugar Baby’s increasing deterioration and the little she has left:

I am afraid of the air
between midnight and
noon – afraid of running
out of cigarettes and
running out of booze.

Seven poems earlier, “Not Here, Not There,” Jake predicts through the same language of fear the junkie whore Sugar Baby will inevitably become, and how through both the past and the present he will serve as both cause and eventual perpetuator of her dehumanization:

I am afraid I am that man who finds strangers for you, brings them home.
I am terrified of the sound a zipper makes.
Rough fingers between your legs.
Of voices at our door.

And Jake knows he owes her – owes his dead children and himself – something that can never be repaid, his prison of futility most painfully expressed in section two of “After the Jam Session,” “Jake Delmonico, Jazz Man in His Dressing Room”: “I owe / money to the man for ponies who land, head first, in the dirt – / they die – right before my eyes – inches before the finish line.”

Blues singer and waitress Jasmine June seeks redemption and freedom from her battered existence by transfiguring her rage into righteous anger as a black woman who reflects upon both her cultural history and identity while she lives through the brutality that accompanies the Civil Rights Movement. In “Jasmine & Jazz,” she explores these sources of jazz and self, intertwined forces of sorrow and joy:

Open me –
You will find a Sunday afternoon in Congo Square.
Slave ships. Drummers. Brass Bands. Creoles
in the street dancing memory
into my blood.

Later, in “Jasmine Watches the Little Rock Nine on TV,” Jasmine June’s internal world gains the momentum of discovery – an understated epiphany – that she is more than a singer and waitress, but a participant in the struggle for equality:

Now I am counting my tips,
thinking of the last time I left home…
How my little brother begins to stutter
every time Mama grabs his arm and whispers
Emmett Till.

Rounding out the quintet are two figures that hover over and haunt the collection with menace and grace: hustler, dope dealer, and loan shark Harry Jones, and the disembodied Angel, who may be the ghost of Billie Holiday. While Harry controls Jake, Sugar Baby, and Jasmine June with his powerful shackles of money and drugs, “Now get down on your knees, / kiss the floor and believe / I will hurt you,” Angel blesses the wretched with hope, though too often they fail to see her:

The sirens in the street are rising.
She recognizes the sound
as something whole, perfectly round –
the ghost of high notes
touching the face of a late night sky.

Though the individual poems can best be described as lyric as opposed to narrative, High Notes as a whole is woven with a narrative trajectory often reminiscent of Michael Ondaatje’s Coming Though Slaughter, a novel in which poetry and prose occupy the same space, based loosely on the life of jazz pioneer Buddy Bolden. Roma-Deeley avoids the pitfalls of laboring to describe the sound of jazz, but instead gives the music shape through the inner worlds of both its performers and those who cross into their lives with steady supplies of death and hope. High Notes succeeds in innumerable ways, particularly in how the book answers its own last line: “What story can contain us?”

Containing riffs and improvisations in various keys and tempos, Lois Roma-Deeley's High Notes captures the starkness and despair of the late 50s jazz scene, where every blues number is fueled by alcohol, heroin, and guilt. High Notes unrolls like a period film in blacks, whites, and all the shades of gray, telling the intertwined stories of four characters who can endure anything except the absence of hope. --R.S.Gwynn

In the emotionally rich and technically varied rhythms of High Notes, the voices of four men and women, black and white, negotiate between the excitements of jazz and the constrictions of poverty and drugs, accompanied and overseen by an angel's presence. Jazz "greats" make cameo appearances in this lyrical, fragmented narrative, but the spotlight is on the invented characters. From sonnets and other fixed forms to jazz-inspired improvisations and prose poems, the book's shifting styles reflect the characters' complex lives. Incomplete, unresolved, hovering between tragedy and redemption, their story stays with us. --Martha Collins

The poetry is terse and direct, packed with significance. She creates language to capture a beautiful experience, the music of the lines alternate between dark and bright, sad and happy, mean and sweet. This is pain poetry, pain endured, celebrated, loved and danced to. This poetry tastes blood but not the blood of hospitals or healing, but of open wounds getting wider, deeper, unforgiving. It's taut, tough, in your face and orchestrates like a mad symphony of howls and laughters and blues, blues, blues baby, that burn to read. It's a clean, crisp, starlight fire, that'll lead you back to your life purpose and make you rethink and reshape your view of life. --Jimmy Santiago Baca

The Short List of Certanties
It’s been a long time since a collection has so affected me. Whether she is writing of our twisted relational lives ...of her own seemingly innate sense that something’s wrong, Roma-Deeley writes with that curious blend of authority and self-doubt that marks our best poets. Ultimately, and reassuringly, she finds the affirmation that sustains her through it all; as her title poem urges, “having courage, let us write a word or phrase on the short list of certainties something that sounds very much like praise.” Which is just what she does in this tour de force.
~Sydney Lea, author of twelve collections of poetry, finalist for the Pulitzer Prize in Poetry, former Vermont Poet Laureate.
High Notes
"It's taut, tough, in your face and orchestrates like a mad symphony of howls and laughters and blues, blues, blues, that burn to read. It's clean, crisp, starlight fire, that'll lead you back to your life purpose and make you rethink and reshape your view of life." --Jimmy Santiago Baca
northsight
"These poems are tough, brave, but also hold an almost physical balance against human suffering."--Norman Dubie